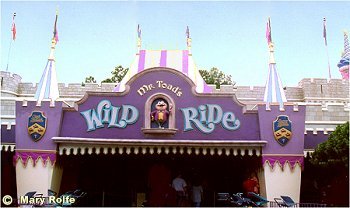 Lost attraction tribute:   Closed October 7, 1998.    If Mr. Toad's Wild Ride was new today, it would probably be called Mr. Toad's Whacky Ride because you are passenger in a runaway car which careens through hilarious scenes reminiscent of the Keystone Kops. On your fast ride which is in the dark, you have a lot of near misses. You blast through haystacks, nearly run characters down, crash through a fireplace, end up on a railroad track with a locomotive bearing done on you.   You end up deposited unceremoniously in Hell, and you laugh all the way.

To hold children's interest while waiting in line, Walt Disney had Fantasy Land rides load on the outside of the ride so the kids could see some action and all the <<<   exterior walls were treated with murals such as this one .


Its millions of fans, however, have lost another favorite ride.   Mr. Toad's Wild Ride was replaced by a Winnie the Pooh attraction.   A strong movement by fans to try and save Mr. Toad's Wild Ride did not succeed.   The leader of the heroic attempt, JT Toad, has a great site.   Please push this big yellow button over here on the right.   This one, right here:

Except where noted, all images on this site are © by Mary Rolfe/Pansophist at http://www.pansophist.com/