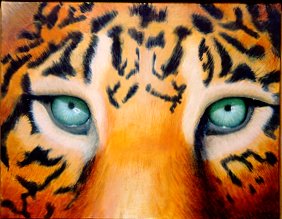 This painting, "Catalysis" is subtitled "Let's Do Lunch". This is a young Bengal tiger male I met at the Gladys Porter Zoo in Brownsville, Texas, when his eyes were still greenish.

Simply put by the Dictionary of Science and Biotechnology, Catalysis is the acceleration of a chemical reaction by a catalyst. As this young tiger stared at me, he gave the distinct impression of a hungry carnivore, a very handsome hungry carnivore who seemed like he'd like to catalyze anything he could sink his teeth into.