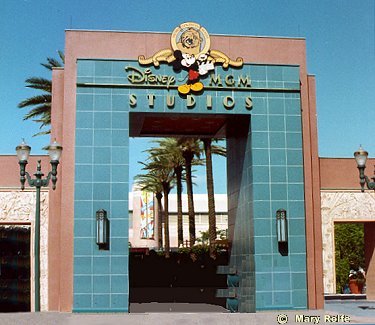 One of probably the most famous photos of Walt Disney World's MGM studios is this archway. Most people who haven't been yet believe this to be the main entrance but, if you have gone through my MGM Studios from the top, you already know it isn't. So where is it?

At the end of Hollywood Boulevard, you come to a hub from which attractions radiate off in all different directions. Ahead of you is The Great Movie Ride , to your left is Super Star Television , and the archway is on your right.

Go through this archway and you enter the entire right section of the park. Why is the archway there, besides just for the simple beauty of it? It's because this large section of the park contains the working animation studios and the soundstages, as well as constantly changing and updated attractions reflecting the newest Disney movies. The making of Hunchback of Notre Dame, 101 Dalmations, Little Mermaid, are there but will be replaced as new movies are released. You will also find the Disney-MGM Studios Backlot Tour , The American Film Institute Showcase, The Loony Bin and a tour of The Magic of Disney Animation.

The purple spot in the top of the sky is a film problem, so I figure the white lines in the sky are not UFO sky writing?

Back to More MGM